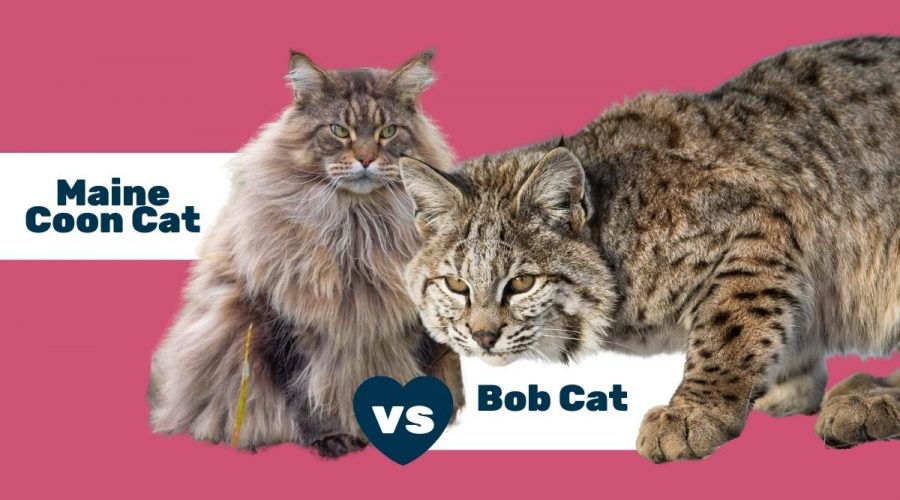 Some of the lore surrounding one of the largest breeds of cats, the Maine Coon, suggests they have Bobcat in their ancestry, which explains their large size and fluffy paws and ears.

The likelihood of such a union is scant, and more plausible explanations for the Maine Coon exist, but this does call attention to the physical similarities between the two.

Both are larger than the average domestic cat, have tufts on the ends of their ears, ruffs around their necks, and large, padded feet that act like snowshoes. The resemblance is superficial, as the two breeds are more different than they seem to the naked eye.

As her name suggests, the Maine Coon is Maine’s official state cat. The breed is considered America’s first indigenous cat, highly regarded for its mousing abilities. Maine Coons are imposing cats, with adult males sometimes approaching twenty pounds. Their coat isn’t fine like a Persians, but silky and a bit oily, as if it would shed water in the weather.

History Of The Maine Coon

Several farfetched theories abound about the history of the breed, but there are a few we can put to rest. One legend suggests the Maine Coon sprang from a cross of the domestic cat with wild raccoons in the area. While these felines may have resembled actual raccoons with their imposing body and ample tail, this cross is impossible. Cats and raccoons aren’t even in the same family. The Maine Coon’s size, tufted ears, and snowshoe paws encouraged the notion that the cats first brought to the New World by early settlers interbred with wild Bobcats to create the Maine Coon. Modern science shows us that this isn’t genetically probable, either.

The legends about the origin of the Maine Coon don’t all involve wildlife. One suggests that a scheme to shuttle Marie Antoinette to Maine for safety during the French Revolution went awry, but only her cats made it safely to Maine’s shores and became part of this new breed. Other legends suggest Viking origin, but the most plausible is that longhaired cats came in with traders and travelers from overseas and interbred with these shorthaired cats. The latter was already surviving with their families in Maine’s challenging climate. Survival of the fittest brought us this gentle giant.

Bobcats belong to the genus Lynx and species rufus, Latin for red. They originally evolved from the Eurasian Lynx that crossed the Bering Land Bridge from Europe to North America approximately two and a half million years ago. The Eurasian Lynx came in two waves, the second evolving into the Canadian Lynx. The Canadian Lynx evolved into a specialized predator of the snowshoe hare. The other descendent of the Eurasian Lynx, the North American Bobcat, is slightly smaller and a much more general predator.

As climatic pressures move the Candian Lynx’s food source further north, the Bobcat fills in the niche left behind. The Bobcat is smaller than the Canadian Lynx because it hunts smaller animals like mice, birds, rabbits, and other small mammals. In warmer climates, they tend to be smaller than those farther north because larger animals hold body heat better than smaller ones and live to pass on that trait. Retaining body heat isn’t a positive in hot, humid environments. Bobcats will take larger prey if they must, occasionally going after fawns, foxes, domestic cats, and even small dogs.

Bobcat coloration serves a biological purpose. Their bodies are tawny to brown to blend with their surroundings to help them stalk their prey. They have white spots trimmed with black on the backs of their ears and underside of their tails so kittens can follow mom more easily. They have slightly tufted ears, a fluffy ruff, and broad, webbed paws with retractable claws. Bobcats, in general, are about twice the size of an ordinary, non-Maine Coon housecat, with males weighing in between fourteen and thirty pounds and females between eight and twenty-two.

Differences Between Bobcats And Maine Coons

First, when looking at Bobcats, we’re looking at an animal in the same family, Felidae, as the common cat, but not the same genus or species. The domestic cat is Felidae Felis catus, but the Bobcat is Felidae Lynx rufus. For comparison, horses are Equidae Equus caballus. You may recognize this from the Southwestern term caballero (horseman). Donkeys, on the other hand, are Equidae Equus asinus. Because horses and donkeys are in the same genus, they can have offspring, called either a mule or a hinny, depending on which parent was which. Mules and hinnies are not distinct species because they can’t breed true. To get a mule, you’ll always need to start with a donkey and a mare. In the cat world, there have been some crosses between domestic cats and other Felidae (the Serval is the genus Caracal and the Asian Leopard Cat is Prionailurus). Still, it doesn’t occur commonly without human intervention.

Stories abound about breeds of cats that are part Bobcat. The Bobcat is not only a different species than the domestic cat but a whole different genus. So far, there’s been no conclusive evidence that this has happened. One well-reported mix, Rocky, was called a Maine Coon Bobcat mix by his owner but was suspected of having been 100% Bobcat and, therefore, not eligible to be kept as a pet. When he was genetically tested, his mother was determined to be a full Bobcat, but the genetic makeup of his father was inconclusive. We still have no evidence that there could be a Bobcat domestic cat hybrid.

Although Maine Coons resemble wild Bobcats in size and outward appearance, they aren’t as closely related as the Bobcat and the Lynx or even the Maine Coon and the Sphynx. They do have striking similarities that fueled conjecture about the origin of the Maine Coon. Longhaired and with a ruff of hair around his face, if a roll of the genetic dice produced a color mutation and kittens were born with a non-standard color, a Bobcat could almost pass for Maine Coon. However, the tail would give him away, as Bobcats always have short tails from birth.

Bobcat sightings aren’t typical because these cats are wary of human contact. As we extend neighborhoods further out and timbering and other habitat disrupting practices continue, we may force Bobcats closer to our backyards. Remember, they are wild animals, not pets. In many states, owning a Bobcat is expressly prohibited by law. Purchasing or adopting a Maine Coon, with its great size yet friendly personality, is the perfect alternative if you find yourself captivated by the wild power of the Bobcat. Maine Coons like the water and can be trained to walk on a leash. Like the Bobcat, Maine Coons prefer traveling on the ground to climbing. If you’re looking for a family pet with that outdoorsy look, you can’t go wrong with a Maine Coon.

Cat Symptoms: How To Tell If Your Cat Is Sick

need a bobcat from Europe any one know where I can get one legally?

Cheetoh Cat Price: How Much Do Cheetohs Cost?