Are you looking for your next furry companion? Are you thinking of a getting a Bombay cat or a black cat? While both cats can be very similar there are distinctive differences. Read on and find out more about these elegant kitties. 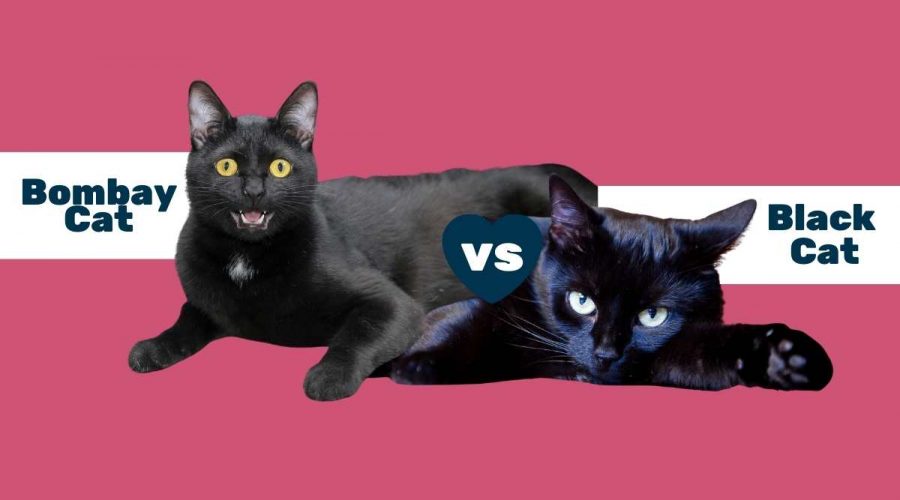 Black cats are extremely mysterious creatures, often associated with magic and lore. Many feline breeds can come in black shades. Some breeds, like Bombay cats, only come in black. However, that does not mean that every black cat is a Bombay. It is not easy to tell what breed a cat is, but there are some ways to distinguish the Bombay cat from the black cat.

One big difference is that black is a coat color, and Bombay is a specific feline breed. Black cats can be many different breeds or crossbreeds. They can be purebred or mixed kitties and come in various sizes. Their coats can be shades of black and even have subtle patterns.

How can one tell a Bombay cat from a black cat? Though it is a challenge, there are a few things owners can look for. What features distinguish these black beauties apart? We discuss these distinct features and learn some of the key differences between Bombay cats and black cats.

Bombay cats are a crossbreed between black American Shorthairs and Burmese kitties. They were bred in both the UK and the United States. In the US, they are credited to a breeder from Kentucky who began to breed these kitties in the late 1950s to look like mini panthers with big, yellow, and gold eyes. The breed has been recognized by the Cat Fanciers’ Association since 1970. The British kitties are similar, though they are bred with Domestic Shorthairs rather than American Shorthairs. They have almost identical appearances and personality traits.

Bombay kitties are known for their deep, black coats. They are set apart from other black cats because their coats are one hundred percent black, root to tip, and have black paw pads and noses. These cats were bred specifically to be larger and to have a more wildcat-like appearance while retaining the calm, friendly demeanor of a domestic kitty.

The breed is not connected to Bombay. They were named this due to the breeder believing they looked similar to black leopards that live in India, where the town of Bombay is located. These kitties can be called the mini black panther, parlor panther, and the patent-leather kid. They are often mistaken for the Burmese but are larger, darker, and have brighter eyes.

One of the main distinguishing features of Bombay cats is their eyes. Bombay cats often have striking yellow eyes. Sometimes the eye color can be almost orange. Bombays with British bloodlines can even have green eyes.

Bombay cats have very large, round eyes. they were specifically bred for this feature, and it gives them a unique, sometimes surreal appearance.

Black cats tend to have smaller eyes than Bombay cats. This is part of the Bombay aesthetic. They were bred to have larger eyes. This can, unfortunately, cause a Bombay to experience more health ailments.

Bombay cats were bred to resemble a panther. Therefore, their bodies are compact and muscular. While some black kitties can have different shapes, generally, they tend to have longer and leaner bodies.

Bombay kitties weigh between 10 to 15 or so pounds. This is a little larger than most cats, who weigh about 10 to 12 pounds.

Bombay cats have black fur throughout their entire body. This includes their noses and paw pads. Their coats are black all over, with no lighter-colored patches. hair is also fully colored from root to tip. Black cats can have a mixture of other colors in their coats and even some patterns, though they can be hard to see. Additionally, black cats can have long, medium, or short fur, while a Bombay only has short black fur.

Bombay cats require minimal grooming of their short, sleek coats. they do a great job at self-grooming and only need brushing about once a week. Black cats, in general, may need more grooming, depending on their coat length and whether they live inside or outside.

Bombay cats have shorter muzzles than most other domestic breeds. Bombay kitties were specifically bred to have this aesthetic and to look wilder. This can cause health issues for a Bombay, so it is essential to take your kitty to the vet for routine check-ups. These health concerns can include respiratory issues, including asthma and bronchitis.

Bombay cats and black kitties can have different personalities. Each cat is different, so this may not apply to all kitties of his breed. Bombay cats are very intelligent felines. They are capable of learning tricks and commands. They are curious and love to play. Sometimes they can even be clingy with their owners. They can get themselves into troublesome situations since they are mischievous.

Bombays are known for getting along well with children, but not all black cats will have the same gentle temperament towards human kiddos.

Bombay cats can also be bossy and love to be in charge, especially of other cats and pets. Many black cats, on the other hand, are friendly and easy-going.

Another big difference is the price. Bombay cats can cost between $500 to $2,000 or more for a high-quality kitty. Show-quality cats will cost more. Black cats, on the other hand, can cost much less. It all depends on the breed. Most cats adopted from breeders will cost more. Many feline parents adopt from shelters, which are full of black cats. because they are associated with bad luck and superstition, they can sometimes take time to be adopted.

Unless you know the specific history of a cat or purchased them from a breeder, it can be hard to tell if a cat is a Bombay or another breed with big bright eyes. All cats need to be loved and cared for. Felines need top-quality nutrition and treats, plenty of toys, space, and regular veterinary care. Regardless of breed or coat color, it is our responsibility to take care of them the best we can. If you have any concerns about your kitty’s health, behavior, or nutrition, reach out to your vet.

How do I know if my black cat is a Bombay cat?

Testing his DNA is a sure way to know if your black kitty is a Bombay. In the meantime, other distinctive features, such as a full black coat, a shorter nose, large golden eyes, and a muscular body, may indicate that your kitty could be a Bombay.

Yes, these kitties are known to be a very intelligent breed. They need a lot of mental stimulation. Make sure to keep lots of toys and interactive ways for them to play around the house. They will enjoy exercise wheels and cat climbing steps, as well as puzzle feeders and maze toys.

Are all black cats Bombay cats?

All cats that have black fur are not Bombay cats. There are a few black cat breeds, but that does not make them Bombay cats. Bombay cats are a specific mix of Burmese and American Shorthair and must be black to be considered Bombay.

Bombay cats and black cats are often mistaken for each other due to their similarity in size and appearance. Though they may seem like the same breed, they have some distinct physical and personality traits. The Bombay cat is mischievous and loves to be in charge. Black cats, in general, are more easygoing. They are both intelligent breeds that enjoy playing and exploring. The major difference is in their color. Although both are black, a Bombay cat is black all over, while a black kitty may have other colors in his fur. Whether you’re looking for a solid black kitty like the Bombay or one with a little more variation, either of these panther-like beauties will make an excellent furry companion.

Cheetoh Cat Price: How Much Do Cheetohs Cost?