Can A Dog Get A Cat Pregnant?

Cats and dogs often live together. Owners often ask the question, "Can a dog get a cat pregnant?" We have the answer, and information on how crossbreeding hybrid animals really works. 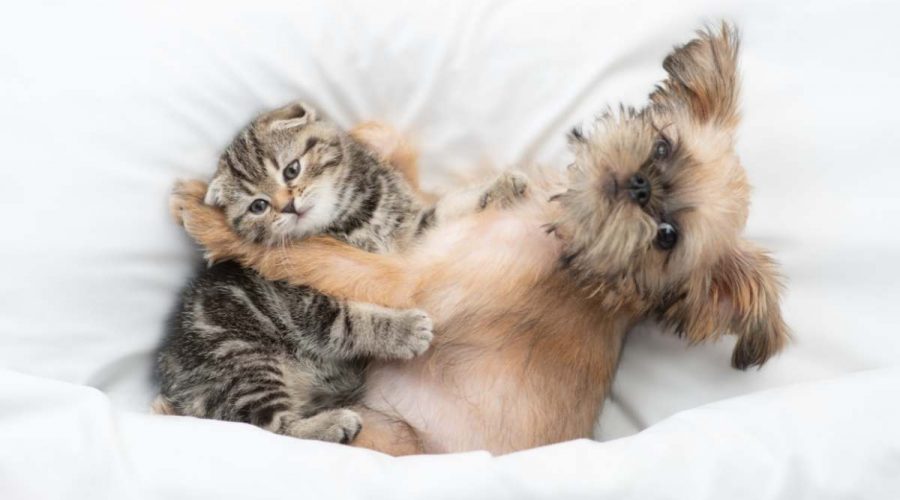 Can a dog impregnate a cat? This may seem like an unusual question. However, it gets asked far more often than one might think. It is relatively easy to find videos and content that appears to show amazing things we would never think possible in today’s high-tech digital world. So, it can be hard to separate fact from fiction.

Pet owners with cats and dogs in the same household will undoubtedly worry about the two species interacting appropriately together. Cats and dogs often make fun playmates and will even cuddle. They are known to sniff each other in fairly intrusive ways. So, the question of whether a dog can get a cat pregnant, or vice versa, has come up, especially for pet owners with intact and unaltered animals of both species.

Spaying and neutering pets are the best way to ensure that there are no unexpected litters of pups or kittens. However, there are varying reasons pet parents may have for keeping animals intact. We decided to investigate this rather interesting subject to see if dogs and cats can mate and produce hybrid offspring. We’ve got everything you need to know about if a dog can get a cat pregnant.

The idea of mixing different species of animals together is certainly not a new concept. Hybrid animals happen when crossbreeding of two different species produces offspring. Hybrid animals do exist, but most are exceedingly rare. Most of them are human-induced crossbreeds and do not often happen in the natural world. One of the most well-known hybrid animals is the mule. When a female horse and male donkey mate, it will create a sterile mule. Humans have bred mules long throughout history as a pack and work animals.

Ligers, which result from a male lion and female tiger mating, are among the most famous hybrid animals. A male lion mating with a female tiger creates a Tigon. Another example is the Beefalo. This pairing happens when cattle breeders match a domesticated bull and a female American Bison. (Fun fact: the Beefalo is one of the few hybrids that can reproduce without human assistance.)

The Savannah cat is another hybrid animal that we see more commonly than others. These big, wild-looking felines are the product of crossbreeding a domestic housecat with an African serval. Savannahs are the largest breed of domesticated cats. They are a relatively new feline breed. The first was bred in the late 1980s. The Savannah is now considered a championship feline breed.

Bengal cats are also hybrid felines. They are a crossbreed between the Asian Leopard Cat and the domestic cat. These cats were first developed at Loma Linda University Medical Center by Dr. Willard Centerwall in the 1970s as part of leukemia research. Once the research was done, some of these hybrid kittens were used for breeding the gorgeous exotic cats we know today as the Bengal cat. This is one expensive kitty. Bengal kittens cost at least $2,000.

Can Cats And Dogs Mate?

The straightforward answer is no. Cats and dogs cannot mate with each other. Despite any kind of internet claims to the contrary, there is no possibility that these two species can crossbreed. They are not closely related enough species to mate. Only animals that belong to the same species can breed. For instance, in the case of the Savannah cat, the Serval, and the domestic housecat, all species belong to the Felidae(cat) family. Dogs belong to the Canidae family.

Dogs often exhibit humping behavior. Owners often attribute this behavior to canine sexual urges or behavior. However, that is not the case. Dog humping or mounting behavior is rarely sexual. In young dogs, less than a year and not spayed or neutered, it can be sexually driven. In older and fixed canines, it is more likely a sign of dominance on the dog’s part.

A dog trying to mount or hump a cat is often signifying that they are excited or want to play. It can also happen if there is a social conflict between a cat and a dog. Even animals that have a good relationship with each other can experience periods of rivalry, just like human siblings.

Can A Dog Impregnate A Cat?

A dog certainly may express mounting or humping behavior towards a cat, and there is even a slight possibility that, at times, that behavior may be sexually driven. However, there is absolutely no way a dog can successfully mate with and impregnate a cat. It is just not biologically possible. These two animals belong to distinctly different species.

They do not have the same DNA and genetic makeup and do not resemble each other enough for any kind of gene pairing or mixing to be successful. This is not even something that could happen in a lab. If scientists could successfully crossbreed these two species by some incredibly remote chance, even in a lab setting, the animal would not have stable enough genetics to be viable.

These two species are simply not sexually attracted to each other. The idea of a dog mating with a cat has probably never occurred to the animals themselves. They are just not biologically compatible in that way.

Canines and felines have different DNA. They are completely different species and do not have the same genetic makeup. Both carry pairs of chromosomes. Canines have far more chromosomes than felines. They have 78, which is 39 pairs. On the other hand, cats have 19 pairs or 38 chromosomes. They are simply not closely related enough for any kind of crossbreeding. Hybrid offspring can only be created from species with the same number of chromosome pairs.

While felines and canines can get along well together and even live for a very long time in the same household, they are two completely different animal species. Their bodies are not built the same way, and everything from nutritional needs, exercise, and even body functions like digestion are different. Dogs are omnivores meaning they can eat meat and vegetables. On the other hand, cats are obligate carnivores, meaning they must eat meat and have a meat-heavy diet. Dogs need a completely different diet and nutrient balance than cats.

If there were an impossible occurrence in which a canine and feline did mate and create offspring, that offspring would not survive as the needs of these two animals are just so different.

Could It Ever Happen?

Unless it is playing out on the pages of a science fiction novel or up on the silver screen, a cat-dog hybrid is not something that can happen. If a cat egg were to be artificially fertilized by a dog sperm, it would not survive. The same goes for the other way around. Fertilizing a dog’s egg with a cat’s sperm will end in the same result. This genetic mashup was just not meant to be.

There are plenty of heartwarming stories about dogs that have adopted kittens and cats that have adopted puppies. Just because these species are two completely different animals and cannot crossbreed does not mean they cannot get along or show maternal or paternal instinct to the other species.

This most often happens when a pup or kitten is abandoned. Mother dogs have even been known to nurse kittens. This can also occur with cat mothers that are affectionate with dogs and encounter needy puppies. Cross-species nursing is an emergency method used in rescue situations when there is no other option.

Throughout history, there have been people who have claimed to have bred a canine and feline together. The idea of creating fake photos and specimens was around long before the tools of the internet. According to Atlas Obscura, there have been several attempts to convince the public of cats breeding with dogs.

In one very far-fetched story in 1977, a man from rural New Mexico claimed he had found a “Cabbit”, a cross between a housecat and a jackrabbit in the wilds of the state. He took the creature on tour, claiming it had escaped from a secret underground government base nearby. The man believed this base was the site of secret alien-human science experiments. This crossbreed, just like a cat-dog hybrid, is biologically impossible.

Help! My Dog Is Trying To Mount My Cat

This behavior is not generally welcomed by a cat, so steps should be taken to stop the dog from doing it. Try to distract the dog from doing this by offering a ball or toy or taking them outside. Cats and dogs can be separated temporarily if necessary. If a canine’s humping behavior is aggressive or cannot be deterred, it is time to call your veterinarian to rule out a medical issue. Check with a trainer to get advice on how to stop this behavior.

To recap and answer the question, “Can dogs get cats pregnant?” The answer is no. They most definitely cannot. These two species of animal are not closely related enough to ever procreate. This crossbreed cannot even happen in a laboratory setting.

Regardless of what videos, stories, or claims are made online, there is absolutely no circumstance where a cat and a dog will crossbreed. These two species can live in the same home and get along. Often cats and dogs that grow up together can be the best of friends. Always make sure to care for each species’ individual needs.

How Long Can Cats Go Without Water? Risks Of Dehydration