Cats biting our faces and noses is fairly common behavior. What does this mean? Is this behavior normal? Why do cats bite noses? We answer the big question "Why does my cat bite my nose?" Learn why and more in this quick guide. 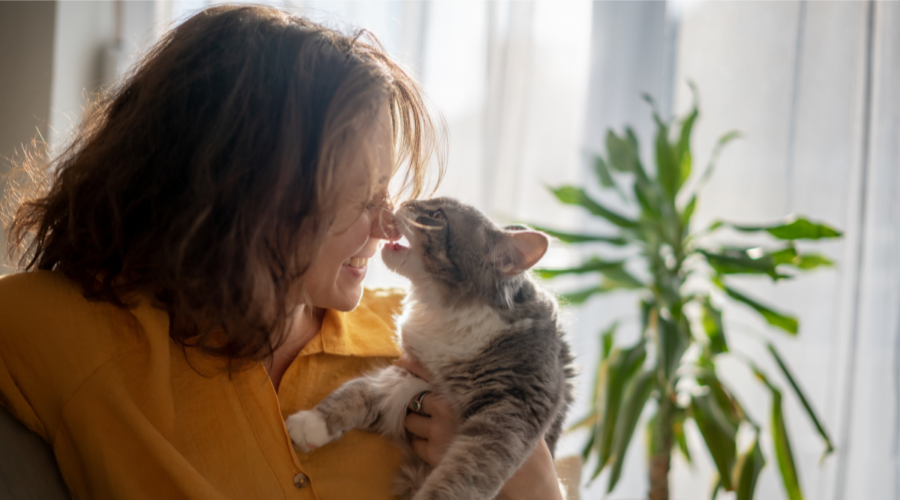 It is a perfect afternoon, curled up on the couch, or sitting in your favorite nook, snuggled in with a good book and a fluffy, cuddly cat. Out of nowhere, that same cuddly purr baby is licking and nipping at your nose. What is causing this behavior, and why is it so common among our feline companions? Owners often ask: why does my cat bite my nose?

Why a cat bites and licks someone’s nose means a few different things. Purr parents often question their pet’s behavior, especially when it walks the line between affection and aggression. This behavior can seem normal or be something that starts suddenly, or even something they only do with specific people.

Felines often communicate with us through their behavior, and owners must pay attention. Understanding why a feline may lick or bite is essential, and behavior owners should not ignore it. We look at several of the top reasons why cats bite our noses, discuss why cats might lick our noses, and what owners should do about it.

Why Does My Cat Lick My Nose?

If your cat licks your nose, you should feel honored because this behavior is reserved for the people with whom they feel a connection and strong bond. A kitty licking your nose is most often a sign of positive and special affection. This is one of the ways kitties show love to their special people. Mama kitties lick their babies, and this behavior continues and is something they share with trusted felines as adults. A feline licking your nose means they care.

A kitty may lick your face as a way of seeking attention. If they want your attention, they know they will get it with a quick lick on the snout. This can be for attention, because they are stressed out, or just because they want to say hi. Some kitties may lick our faces because they like our skin’s salty taste. This happens with other body areas like our fingers and feet.

Cats also lick our noses as a way of marking their territory. Licking your nose tells other cats and other people that you belong to them. This can also be attributed to grooming behavior, as kitties lick and groom each other. You are one of the crew, and they might decide to start grooming you too.

Cats biting our noses means a few different things. It is a behavior that sometimes indicates positive intent, and other times can signify aggression. It all depends on the specific circumstances and the individual animal. Just like licking our faces, felines biting noses is a way they communicate with us. Often, a kitty licking your nose can lead to biting, leaving owners wondering what is happening and worried that something could be wrong.

The way a feline bites your nose is an indication of what is motivating that behavior. If it is a soft, playful nip, they likely are showing affection or want to play. A rougher bite followed by more or accompanied by other odd behavior is a sign something is amiss and may need further investigation. Pay attention to when the biting happens and what is going on around your pet at the time. Learn what is triggering this action, especially if it comes on suddenly. Any behavior that is uncharacteristic of a pet should be paid attention to. It is best to contact your veterinarian if this kind of interaction continues, is out of character, or starts to get very aggressive. Your pet may be injured, sick, or even have a chemical imbalance or another issue that makes her more aggressive.

Why Does My Kitten Bite My Nose?

Kittens can often get removed from their mothers and litter mates too early. This can lead to them developing some nervous behaviors, including licking and biting. Kittens like to show affection, so they will often lick each other, as well as the faces of their beloved caregivers, who most often happen to be human. A kitten nipping your face is almost always just a sign of affection or nervousness. They are looking for comfort. After all, navigating the great big world can be scary. Kittens bite our faces to play, show love, and sometimes just because they are curious, playful kittens, and it seems fun.

Why Does My Cat Lick My Nose Then Bite It?

Most likely, these actions are a sign of affection. Felines like to show us how they feel through their behavior, and licking is a common way to do so. This is often the case if the behavior happens when you are cuddled up, with your face close to theirs. Overstimulation can also trigger this kind of response. A cat is not always aggressive when overstimulated but might be trying to let you know they need a break.

How Can I Get My Cat To Stop Biting My Nose?

A cat softly nipping at your snout may be ok, but sometimes this action can be distressing to owners. This can be especially true if your kitty starts targeting other people or seems aggressive. Purr parents can try a few different things to deter a feline from biting human faces.

Always pay attention if biting happens during petting. This is a sign of petting-induced aggression, as well as overstimulation. This can be your kitty’s nice way of saying, “I’ve had enough!” Stop petting them and offer a treat or fun toy instead to make a positive transition, and let your pet have some room and time to decompress.

Your cat likes biting your sniffer because they are bonding with you. This is how they show affection, and as long as it is not an aggressive bite, it is intended to be comforting.

Why will my cat bite me but not other people?

Your kitty might bite only you because you are their most trusted person. This does not seem like a great way to show you they love you, but it is behavior they usually reserve for the people closest to them.

My cat bites my nose when I sleep. Why?

This is most likely because they want you to wake up and feed them or play. Sometimes, they may alert you to something they think is off or needs your attention. A kitty aggressively biting you in your sleep is not affection. This is something you need to talk to the veterinarian about. Your feline friend could be experiencing an underlying medical condition or be stressed out and taking out her distress on you.

Why does my cat bite me softly?

Cats will bite people softly as a way of saying hello, as affection, or because they want your attention. Bites during petting are a sign of petting-induced aggression and mean your cat wants some space.

Cats often bite their owner’s faces, and most of the time, it is not aggressive. Owners need to pay attention to what is going on around them and at the time. Always give a kitty some space if they seem stressed out or aggressive when being petted. Cats communicate with us through behavior, so it is essential to pay attention to them, as well as what is going on around them at the time. Always consult a veterinarian if your kitty starts to bite aggressively. The information we present is to inform only. This is not a substitute for consulting a veterinarian or feline behavior expert.

Why Does My Cat Obsessively Knead?

10 Signs Your Cat Has Imprinted On You

My Cat Is Scared Of Something I Can’t See