Is your cat ticklish? That depends on how you define it. Learn more about whether or not cats are ticklish here. 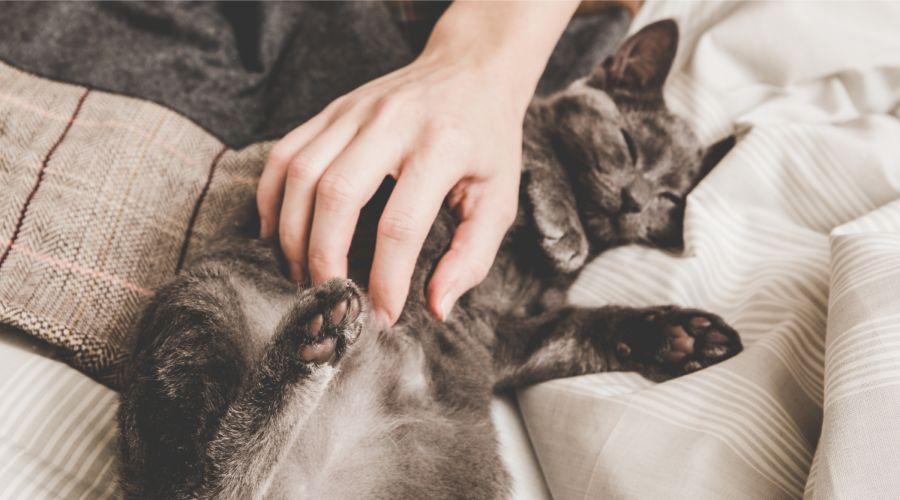 If someone tickles our ribs, we may laugh involuntarily even if we’re not particularly fond of being tickled.

That laughter is one of the most unmistakable signs that someone is trying to tickle you are being successful.

Whether or not animals, especially cats, are ticklish is much harder to know. We first need to discuss what “ticklish” actually means.

What Does It Mean To Be Ticklish?

There are two scientific ways of describing the sensation of being tickled. Knismesis and gargalesis are scientific terms that refer to the differences in the sensation experienced between the two forms of tickling. Knismesis is triggered by very light pressure and is generally considered unpleasant. On the other hand, gargalesis involves heavier pressure to specific points (to the ribcage, for instance, as everyone with an older brother knows) and involuntary laughter.

Knismesis is the term that describes the feeling of a light, unpleasant tickling sensation as if something is crawling on the skin. Knismesis causes not laughter but an undesirable response that makes us quickly brush off or move away from whatever is causing the sensation. It is believed to be a response that evolved to help protect animals, including humans, from danger. Anyone watching a cat with a flea crawling across its skin can attest that cats experience this sensation, sometimes known as a “moving itch.”

Gargelesis is the tickling sensation humans prefer to have – the one that makes us laugh. Generally associated with heavier pressure along specific areas like the ribcage, gargalesis is not as widespread in the animal kingdom. Humans experience this phenomenon, which seems to be a form of social bonding. Some primates do as well, but other mammals don’t show the same sort of response to the heavy pressure we would call tickling.

So, Are Cats Ticklish?

In a word, yes, cats are ticklish, but not in the same way as humans. Knismesis, the unpleasant feeling elicited by a light touch moving across the body, happens to animals other than primates. Knismesis in cats is evidenced by their reaction when we lightly drag a toy across them or witness a bug crawl across a resting cat. Their skin twitches, and they attempt to dislodge whatever is causing the unpleasant sensation. Cats don’t, however, experience gargalesis. If we try to tickle our feline friend like we might a little brother, we’re likely to receive a sharp rebuke. Pet or brush your cat gently and listen to his body language; you’ll make him happy – no tickling required.

Is Cat Insurance Worth It? What Does It Cover?