Some cats really like human beards. They will rub on them and want to nuzzle in close. Why do cats like men's facial hair? Owners often want to know what this focus on their beard means. We have the answers about cats and beards. 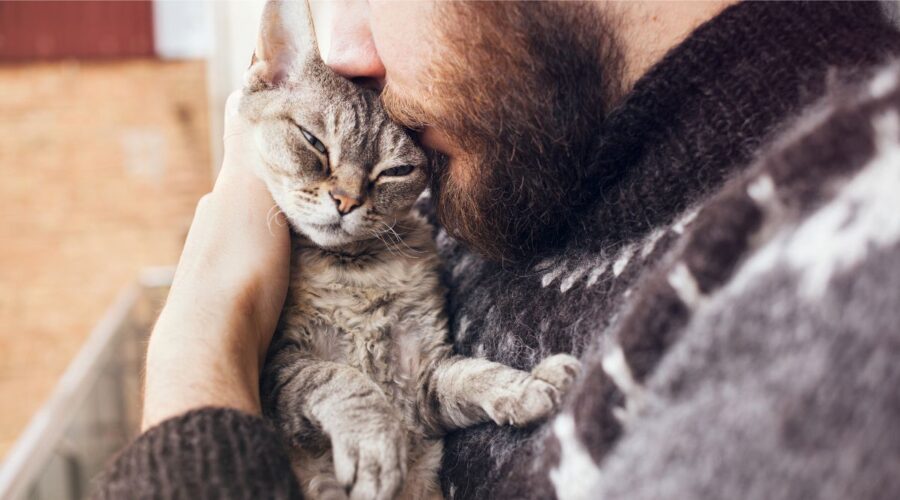 Cats are curious creatures and often exhibit behavior their owners may not know how to interpret. One rather interesting and sometimes unexpected behavior cats can show is rubbing against people. This is expected along a person’s leg or even hands, but some owners may have a cat that likes to rub against their face. Some owners may even have a cat that wants to lick or nibble at their beard. This behavior towards bearded folk leads us to wonder why cats like beards.

There are quite a few reasons why cats might like beards. It could be the warmth, the scratchy feeling, or simply being that close to their humans. Not all felines like beards, nor do they like all kinds or lengths. Of course, there is a lot of room for interpretation, and every kitty is different, but some felines seem to be extremely interested in human facial hair.

Why do cats like beards? Is this a sign of affection? Do all felines behave the same around beards? There are so many questions this subject can bring up. We decided to investigate why cats like facial hair and what might be behind this curious behavior.

It is not particularly unusual for a purr baby to be interested in his human family’s hair and skin. Beards are just another place humans grow hair, so it is normal for kitties to be curious. Feline behavior can often be challenging for humans to interpret, so a kitty nuzzling into a beard can sometimes be a sign of affection or a sign that he feels his space is being infringed upon. Felines are committed self and social groomers who may share this behavior with their bearded human family members.

Owners need to remember that feline behavior is not as upfront as humans. Sometimes nuzzling is not affectionate, and at other times it is. A kitty can seem perfectly content one moment and then suddenly swat or nip at his owners. While this seems to come out of nowhere, there are minor indicators owners may not have seen. Felines are very territorial and may not appreciate someone in their space. Reaching out to swat at a beard may signal someone is too close.

They may like the smell and warmth of a beard, and rubbing up against their owners is a way to show affection. Not all kitties will do this, but many who do are simply offering their owners a little bit of love.

Cats also like the way beards feel. They are covered in fur, and to them, a beard can feel like a human’s fur. They are also often warm and smell a lot like their humans. This can intrigue a kitty’s curiosity s and make them want to get a little bit closer to investigate further.

Felines are skilled and dedicated self-groomers. Grooming is also a social behavior that they engage in with other kitties. This is part of the reason why kitties like to sniff and play with human hair. It can seem like a game or even an annoyance to us, but for felines, this is a form of communication. Multi-kitty families will often notice their kitties grooming each other. This behavior is referred to as allogrooming. Felines will groom, lick, and even bite each other as part of this. It is a way they take care of each other, interact, and show affection. It is only natural that they would want to extend this care to their favorite human beings, especially if those people happen to have a warm fuzzy beard.

Mother kitties will groom their kittens from birth, and this behavior then passes to adult kitties. Felines bond with each other through mutual grooming. When they reach out for a human’s hair or facial hair, this can be similar to grooming another cat. We groom them, so in a way, it makes sense that kitties feel a bond of mutual grooming with us.

In some cases, cats grooming each other is a sign of dominance. In multi-cat homes, more dominant kitties sometimes have a higher instance of grooming the others. This could be compared to a maternal or paternal instinct to take care of those that are weaker or less dominant than them.

This is not always for affection, either. They might be bored, stressed out, or even have an underlying medical issue. A cat may be bored and want to play, and messing around with the nearest face and beard might be what they need to liven things up. They will learn that this gets a reaction for their owner, so they will do it again when they want attention.

There is some debate about beard length and if that impacts a kitty’s interest. There have been few, if any, reputable studies on the subject. It does not appear that cats have a preference for one style or length over another. This likely depends on the individual kitty. Feline attitude towards human facial hair is more indicative of how much they like and bond with that man than the preference for the length of his beard.

Why Is My Cat Biting My Beard Or Chin?

Chin biting is not always related to having a beard. At times it is another way they show affection in the same way they playfully bite other felines. Sometimes chin biting can be triggered by too much petting. This is called petting-induced – aggression and happens when a kitty has reached their limit. They may show small signs before lashing out, but owners can easily miss those.

Some felines do not like to be petted. They tolerate it only for a brief time or not at all. Because they have sensitive follicles, petting does not feel good. It can even be painful if too forceful. The level of petting tolerance a kitty has is different for every animal. Chin and beard biting or swatting is their way of saying, “Stop, that is enough.”

Some felines will have something called hyperesthesia. This is a condition where they have extreme sensitivity to touch. This condition can cause them to lash out if they are touched, as it can feel unpleasant to them.

When Is It A Problem?

A kitty liking a person’s beard is something that can go either way. It can be a cute, fun way a pet interacts with its human. However, if this behavior becomes too aggressive or constant, it can become problematic. Owners who feel that their cat is acting unusually or has an unhealthy obsession with their facial hair should consult with a veterinarian to find out what is provoking this concern. Felines get stressed out just like us humans, and they show it in unusual ways. Odd or obsessive behavior can be a sign of something else going on.

How To Stop A Cat From Focusing On A Beard

Men have a few options to get a cat to stop playing with or be focused on their facial hair. If they are using a product, the cat might be smelling or like the taste of it, they can discontinue use.

Owners can physically move their bodies and put space between them and the cat. This is easy to do by standing up or going to a new room.

Redirecting the behavior is the best option owners can take. Keep a few toys and treats handy. Felines love chasing things and will get highly interested in a laser pointer or other distraction. Catnip toys are a great option, as are freeze-dried meat snacks. Kitties can even play with stuffed animals or other furry toys that feel like beards if they really need that sensation.

Cat toys engage both the mind and body. Puzzle toys and ball spinners can keep them entertained for hours. Exercise-based toys are great for both mental and physical stimulation. Owners can provide cat wall steps to climb on and kitty hamster wheels to run and release extra energy.

Some kitties will have a ruff of fur around their necks that looks like facial hair, and all kitties, except a few hairless breeds, have whiskers, but felines do not grow beards in the traditional human sense. In felines, whiskers are sensory instruments that help them see and navigate in the dark. When whiskers are stiff and pulled back, a cat might be showing he feels threatened or stressed. Loose, relaxed whiskers mean a cat is feeling good.

Whiskers are incredibly sensitive hairs and have highly functioning nerve follicles that help kitties see and understand what objects are around them. Kitties grow these hairs on their muzzles and in other body areas. Whiskers can grow near the eyes and jaw and on the forelegs. These sensory tools guide them and are especially helpful when wiggling through narrow spaces. Whiskers are part of why kitties are so flexible and can see well in the dark.

Is eating my beard going to harm my cat?

While eating hair will not necessarily harm a kitty, it Is not a good idea to let them do this. Humans often use oils and other hair products, which may be toxic to felines. Additionally, there is a chance of choking or coughing up a hairball later. Avoid letting kitties eat your facial hair, as it is not good for them or for you.

How can I get my cat to stop licking my beard?

Purr parents must be firm and redirect a kitty’s behavior if they behave obsessively or aggressively towards their face or hair. They may like the taste of products, want attention, or simply be playing, but this behavior needs to stop before it gets out of hand. Provide a distraction, a toy, or a treat to refocus your cat. Use a firm tone, and say “No” every time they try to get close to your face.

Should I cut my cat’s whiskers?

Never trim or cut a cat’s whiskers. Whiskers will shed normally but do not trim them. It will cause kitties to be unable to sense their environment accurately. They can become afraid, confused, and disoriented.

Some cats like beards, which is just part of life. Kitties may like them for different reasons. They smell good, are soft to rub against, and are a way purr babies can help return the favor of grooming to their owners. Felines show affection and aggression in unusual ways, and playing with or trying to lick an owner’s face is one of them. This behavior is not expected from every cat, nor should it be alarming unless a kitty becomes obsessive or aggressive. Cats liking beards is just another great part of the fantastic adventure of being a purr parent.

Do Cats Find Our Voices Soothing?