Do Cats Find Our Voices Soothing?

Cat owners often talk to their kitties, sharing with them their daily lives, secrets, hopes and dreams. We know we love to talk to cats, but do cats find our voices soothing? Learn more about how cats feel about us talking to them. 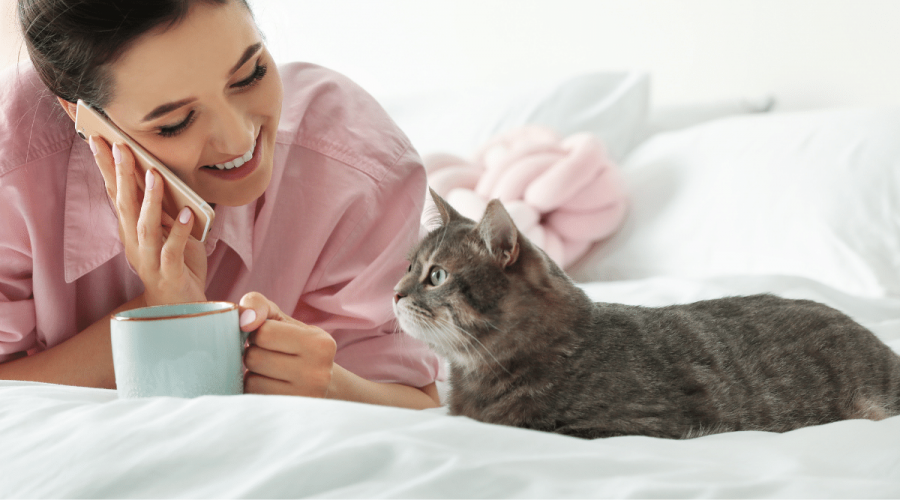 It is often wondered by cat owners if their kitty companions like or even respond to the sound of human voices. We want to cuddle and coo to them and are rewarded with purring and snuggles. While we find talking to cats calming, is this feeling shared? Do cats find our voices enjoyable and comforting? We looked at the research to determine if cats find our voices soothing.

Research has shown that cats do recognize and respond to human voices. They know what their owners sound like and have a much stronger reaction to humans they trust than to strangers. Research done at the University of Tokyo in 2013 concluded that cats recognize their owner’s unique voices. However, they selectively choose to ignore them. This was proven by testing the voices of strangers as well as owners to see who cats responded to more significantly. That research interestingly showed that while cats do recognize our voices, they can be choosy about responding, even to their owners.

Cat owners love to talk to their pets. Kitties are wonderful listeners and are the keepers of many of our human secrets. Research around linguistics has found that pet-directed speech tends to be much like how humans speak to infants. Similar to how a mother speaks to her baby in a soft, higher pitch, cooing tone of voice, with a slower tempo, we talk to pets in some of the same ways.

Cats are less responsive to human voices than some other common species of household pets, such as dogs. Many cat owners report feeling that their pets may be dismissive of them. Research shows that kittens respond better to kitten-directed speech than human-directed speech. Unlike dogs, feline owners do not tend to continue to baby talk two adult cats, though this certainly may be the case for some.

Felines often communicate through body language. Meowing is something they do not usually do with each other except when very young. It is their way of vocal communication with humans. Cats will meow when they want food, when something is amiss, say hello, or want some attention. Felines will also use other signals to interact with us, such as arching their tail, rubbing their bodies on us, or trying to play.

Cats can understand certain words, though it is doubtful that they understand most of what we are saying to them. From a young age, they learn to respond to different verbal cues. A kitten is named quickly after it arrives home, so will learn the meaning of that word very quickly. More than understanding the specific meaning of their name, they will associate that word with some action happening and will know how to respond. Other words that signify notable events, such as mealtimes, are also words that cats will learn to recognize.

Felines interpret our language more by reading visual, verbal, and physical clues that we put out. Cognitively, their brains will not understand human speech and language the same way that we do. So, while they may recognize select words, they do not specifically understand what we are saying when speaking to them. Our words to cats are essentially what their meows are to us. We use deduction and reasoning skills to figure out what they want rather than understanding what each specific meow means.

Cats do not understand human language or what we mean when talking to them. They do learn that certain noises, tones, and voices mean something. Felines will respond to that association rather than the specific word. So far, research has yet to prove that specific words in the human language have special meaning to cats. Overall, they associate words with the consequence or action that usually follows them rather than understanding any direct meaning of a word.

Do Cats Understand Tone Of Voice?

Cats will learn to associate events with certain tones of voice or cadence when their owners speak. Some researchers believe that cats will mimic or emulate their owners by trying to match their meow to their owner’s tone of voice. They can notice intonation very quickly and react to someone being calm, excited, sad, or angry. Cats are likely to connect meaning to the tone of voice regardless of what words are being spoken. For cats who do recognize more specific words than others, they may not respond if words are said in an angry or aggravated tone of voice.

As with specific words, cats can get used to certain tones of voice or specific people who speak to them. For example, if one family member is responsible for feeding them breakfast, they will respond to that family member speaking in the morning. Felines are observant, intuitive creatures and learn to understand their owner’s behaviors. They can tell if their owners are upset or happy, or sad. A big part of this intuition comes from associating and understanding what different vocal tones mean. When using a soft, pleasant tone of voice, cats do find our voices soothing.

Talking to your cat is a normal part of bonding with them. These constant little companions offer us comfort and an open ear whenever we need to talk. Cats bond with us and appreciate the attention and don’t always love being alone, so regularly talking to your cat will only strengthen your bond. Showing your kitty attention by speaking to them creates an atmosphere and environment where they feel safe and comfortable.

Felines associate the human voice with actions such as getting fed, being petted, or getting a treat. They associate positive rewards when humans start speaking to them so that they will become more attentive. While cats might not understand what specific words mean, they will pick up on the tone of voice and body language. They can know when their owners feel sick or are angry. Cats will often stay away if they sense an aggressive tone.

Cats will often purr or rub up against our legs or hands when we speak to them. This is one way that they communicate that they enjoy what is happening. They much prefer soft, soothing voices and tones of voice and will respond better when approached that way. Some cats will try to emulate human conversation and will meow back at their owners when they are spoken to, showing that they are excited to see you or interact.

It is important to remember that every cat is different. They are individual creatures. No two cats are going to behave the exact same way. Many people have had cats that learn to recognize several words, and then there are those who have cats who rarely interact with them. Cats are finicky unpredictable creatures, and it would when it comes to communication, they can be very picky about who they want to interact with and how they want to do that. While some cats may find our interaction and voices a soothing, welcome experience, others may have a more reclusive personality.

Pet owners often ask why cats and dogs are so different when it comes to understanding human language. For starters, they are two completely distinct species and cannot be expected to behave the same way. Another significant factor is that throughout history, dogs have been trained to be human companions, hunters, guard dogs, and work dogs. Cats, however, have not. Though felines are a revered species in some cultures and have been present throughout human civilization, they have long been left to their own devices. Because of this, their interactions with humans and their roles as human companions are different than that of their canine counterparts.

Cats are fascinating creatures, and we learn new things about them all the time. We know for sure that cats interact and respond to humans’ spoken language. While they might not understand everything we are explicitly saying, or even most of it, they appreciate that we are talking to them. Cats pick up much more from what we say. Meanings of words to cats are more associated with tone of voice and actions that follow when those specific sounds are made.

Felines are very intuitive and intelligent creatures who will understand certain words. However, there is not much research or evidence to show that cats can understand precisely what humans are saying when we talk to them. Because our brains work differently, they know that we are communicating but must rely on other things to determine the meaning of those verbal messages. So, to answer the question of do cats find our voices soothing, yes, they do. Generally, cats will find our voices soothing and comforting as long as we use a tone of voice that does not convey negative emotion or harshness.

Chatting with our pets strengthens the bond and connection with them. It is a wonderful way to show affection for your cat and let off steam after a big day. Cats make wonderful listeners, and you can rest assured that what you share with them stays with them. Keep on having those happy cat conversations!

What Happens If Cats Are Left In A Dark House?