Savannah Maine Coon mix cats are a crossbreed of two highly popular housecats. It is a loving, fluffy and soft feline. Learn about these popular mixed breed housecats in our comprehensive guide. 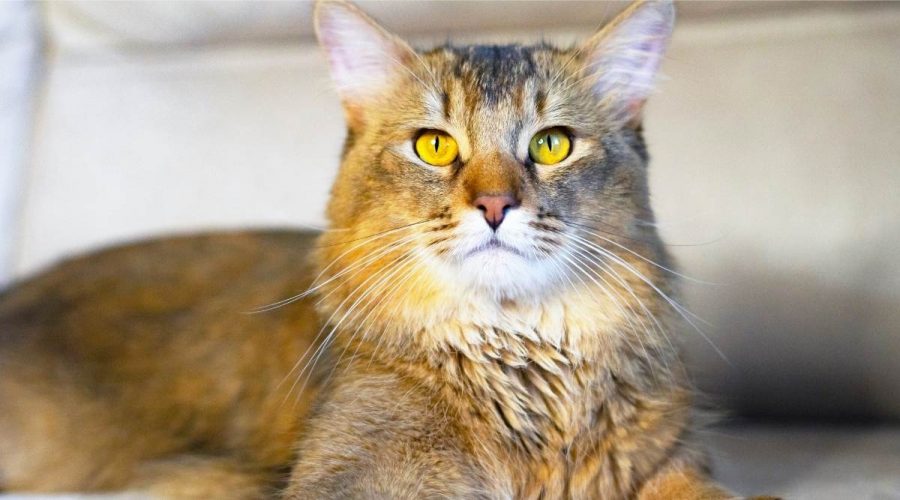 When you buy something through one of the links on our site, we may earn an affiliate commission.

If you want an exotic-looking cat breed with a great personality, the Savannah Maine Coon mix cat could be the right cat for you! These cats have beautiful spotted coats and long fur, which makes them adored by many.

Selective cat breeding has resulted in a lot of diverse and adorable cat breeds, and the Savannah cat is a result of a serval being bred with a domestic cat. Therefore, they have lots of spots like a wild cat. The Maine Coon, however, is one of the most common cat breeds and is not a product of specific breeding.

A union between these two cats is pretty rare, so the cost of Savannah Maine Coons can go through the roof.

The Savannah cat is a rare crossbreed between a domestic cat and the wild serval. This breed originated in 1986, with the first kitten being born to this pair called “Savannah,” thus naming the breed. Savannah cats have beautiful spots all over their coats, just like servals, making them look exotic.

These cats are smaller than the serval, however, weighing anywhere from 12 to 25 lbs. In addition, the height of Savannah cats is only 14 to 17 inches, compared to the whopping 17 to 24-inch height of the serval.

The personality of these cats is similar to those of a wild cat, with many wild instincts still embedded in its lineage.

Being an extremely popular type of cat, it’s no surprise that Maine Coons often get crossbred with many exotic or rare breeds. However, their long, silky fur and loving temperament are widely sought after by many breeders. Maine Coons come in a variety of colors, including tabbies, colorpoint, tortoiseshell, calico, and many others.

These ginormous cats can weigh up to around 18 pounds, which is quite a lot more than the average domestic shorthair.

The Savannah Maine Coon mix is a pretty rare breed, considering how hard it is to get Savannah cats. These fluffy felines typically have the long fur and tall stature of the Maine Coon, while their markings normally resemble those of the Savannah cat. However, it can be the other way around, with the cats having tabby stripes and short fur.

Whatever the mixed breed cats end up looking like, these cats are as large as the Maine Coon when fully grown.

The Savannah Cat was first bred in 1986, which makes any crossbreed involving the Savannah a relatively new one. Maine Coons, however, were discovered in the 1800s, making them an older cat breed.

Savannah Maine Coons have a very interesting personality. They’re sociable and playful, although they might not be very friendly towards strangers. However, these cats tend to be devoted to their owners.

In addition, Savannah Maine Coons may end up acting a little bit feral at certain times as a result of their wild ancestry. They will most likely need careful training to refrain from scratching furniture to sharpen their claws, like cats in the wild do.

The Savannah Maine Coon is a tall breed of cat, as their height can range from 10 to 17 inches. This cat crossbreed’s eye colors can range from a pale greenish-hazel to dark copper.

As for appearance, these cats range from pale brown with dark spots to black tabbies, depending on the color of the Maine Coon parent. However, the Savannah Maine Coons will almost always be some shade of brown.

A Savannah Maine Coon cat may be the right cat for you, but before adopting, you must have all the right things to make sure your furry friend has a happy and fulfilling life. Because of the wild heritage of Savannah cats, they will need a scratching pad or post to sharpen their claws on. If they don’t use this, training might be necessary.

In addition, food and water dishes are needed for any animal. The water dish should be kept full and in a place where the cat can easily reach it. One more necessary item is a litter box, which may also require some training to use.

Because Savannah cats are part serval, it makes sense that they would need lots of exercise to stay healthy. Toys that hang on a string are good, as well as things to chase after and pounce on. Dangling a toy from a pole is one of the best ways to give your Savannah Maine Coon mix lots of exercise since these cats can jump very high and need to exercise their back legs.

Training a cat can always be difficult, especially because they don’t follow orders and respond to commands as easily as dogs. In reality, the only way to train a cat is to reward them with treats after they do something right. For example, many cats will need to be litter box trained if they haven’t learned yet.

In addition, training your cat to scratch a scratching pad or post is important if you don’t want all your furniture to have claw marks. The worst way to train a cat is to punish them if they do something wrong. Never punish a cat! They won’t understand what they did wrong and will likely become anxious and stressed.

This mixed breed has a life expectancy of 10-13 years. Sadly, Maine Coons are known to have many genetically passed down health problems, which can leave them in a lot of pain.

Some common health problems are:

If you take your cat to the vet often and feed them a balanced diet, you may minimize the chances of these health problems appearing and hampering your cat’s ability to live a good life.

Savannah Maine Coon mixes can cost up to a thousand dollars. This makes them one of the more expensive cat breeds. This makes sense because of how rare and difficult to get purebred Savannahs are. In addition, if you’re seeking out breeders instead of adopting, make sure you choose good and reputable breeders who take good care of their cats, as opposed to a kitten mill.

As mentioned in many previous paragraphs, Savannah Maine Coon mixes are pretty rare, so your chances of finding one in a shelter are low but not impossible. However, there is no way to know for certain what breed a shelter cat is, and you would stand a better chance with a breeder.

Maine Coon Savannah cats are normally friendly towards small children, although they may become a bit intolerant if provoked for a long time.

These felines also get along with dogs well if they’re introduced calmly. However, keeping small animals such as birds may pose a problem with your cat, as they can jump higher than the average cat due to their extremely strong hind legs and could reach a small prey animal on a shelf.

The Maine Coon Savannah mix can be an expensive breed to obtain, but the money will be worth it when you have a big, friendly cat in your home. Their beautiful spotted coats are admired by many, and their sweet personality will definitely tug at your heartstrings. Maine Coon Savannahs make relatively good pets, and they would be a great addition to your family.