Blue Maine Coons are a beautiful color and make great pets. Their lovely gray-blue color is caused by their genetic makeup. They are also among the biggest cat breeds in the world. They are gentle and sweet, making them wonderful family pets but let's dive in to learn more. 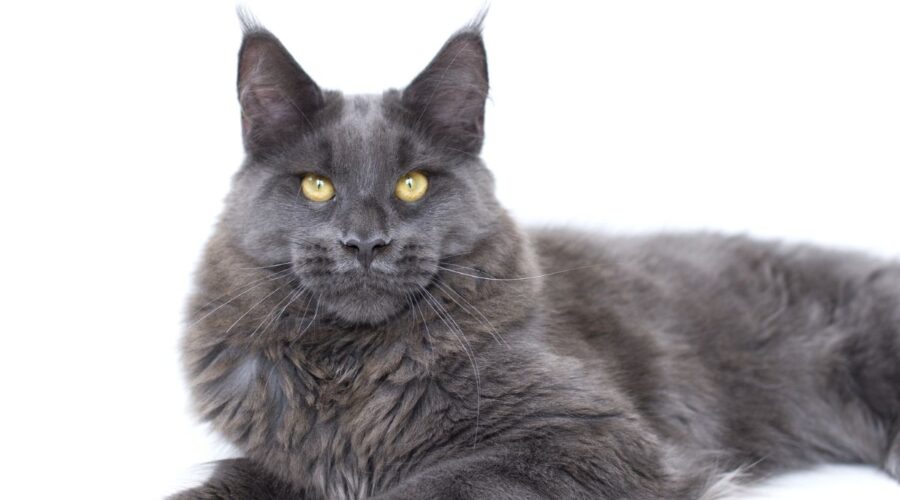 Blue Maine Coons are a beautiful color variant of the widely sought-after Maine Coon. In this article, we’ll delve into many details, such as genetics, rarity, prices, and where to find these pretty kitties!

Maine Coons are in very high demand among cat lovers for many reasons. Their soft, fluffy fur and large size add to their general appeal, so they can get quite expensive. These fluffy cats come in a variety of colors, like ginger, brown, and black. The blue color is more gray than blue, despite the name, and is a diluted form of the black color.

Since the dilute gene is carried by quite a few cats, blue is not an exceptionally rare Maine Coon color, unlike their rare counterparts, the Blue Smoke Maine Coon and the Blue Chinchilla Maine Coon.

Maine Coons were first brought to Maine by European sailors in the 1800s, and have been around ever since. The likelihood of Maine Coon cats interbreeding with other cat species during that time is very high, since there were other cat species in Maine at the time. Genetic research shows that Maine Coons are descended from the Norwegian Forest cat and another unknown cat species, which explains their large size. In addition, these cats do tend to look a lot like their Norwegian relatives, although their fur is a bit shorter.

The blue color occurs very often among Maine Coons, as it is one of the most common colors and is easy to get from breeding. The typical Maine Coon colors are white, cream, brown tabby, black, and blue. The dilute gene, which is how blue is caused, is responsible for turning red to cream, chocolate to lilac, and black to gray (also called blue by most breeders). To have a few diluted kittens in the litter, one parent must have the d/d genotype. If two cats with the d/d genotype breed, then all their kittens will be diluted.

Maine Coon cats are one of the largest domestic cat breeds in the world, with the females growing up to 14 inches tall, and males having the possibility to be 16 inches tall! These furry felines can weigh anywhere from 15 to 25 pounds, which is more than double the classic American Shorthair’s weight. Maine Coons were considered the largest domestic cat breed in the world until the Savannah Cat was introduced in 1986.

Maine Coons are a very interesting breed. They have a sweet, happy personalities, and tend to be very patient around small children and dogs. In addition to this, Maine Coons are very vocal, but they’re not known to meow often. Instead, these furry felines communicate through a wide variety of chirps and trills. They aren’t very loud cats, but will chirp very often if they want food or attention. When a Maine Coon trills, it means that they’re feeling happy or excited at the moment. The only time a Maine Coon should meow is when they’re feeling lonely or are in pain. If you aren’t keen on owning a talkative cat, then a Maine Coon may not be right for you.

Although Maine Coons are an adorable breed, they can have a lot of persistent genetic health problems. For example, these kitties have been known to suffer from genetic diseases like hip dysplasia, spinal muscular atrophy, and hypertrophic cardiomyopathy.

Hip dysplasia occurs when the femoral joint is deformed, causing a lot of pain, lameness, and stiffness for the affected cat.

Spinal muscular atrophy is another genetic disorder that causes the loss of spinal cord nerves and becomes apparent with kittens as young as 3-4 months of age. It is incurable, but it surprisingly causes no pain for the cat. Although your cat may walk with an unsteady gait for the first period of its life, the disease progressively gets worse. Over a short period of time, the cat will slowly lose the ability to jump, run, or even lay down comfortably without assistance. Even though spinal muscular atrophy isn’t a deadly disease, it’s incredibly sad for the poor cat.

Hypertrophic cardiomyopathy is a disease of the heart which is almost always fatal. Once the symptoms of this disease appear, the cat in question will likely only survive two years or less, as the chances of surviving heart failure are low.

Nutrition is one of the most important things for any cat breed. Cats must be fed a balanced and varied diet, as they have been known to get bored with their current cat food. However, when organizing a cat’s diet, keep in mind that they are carnivores, and vegetables aren’t required for a healthy cat.

Some wet cat food brands that have a variety of flavors such as chicken, turkey, beef, or fish are good. It’s not ideal to change a cat’s brand of food too often, as it takes them a while to adapt to changes in their diet. A mix of dry and wet food is normally enough to keep a cat healthy, with a few treats being acceptable every now and then.

Maine Coons have similar care needs to those of the basic housecat. They’ll need a litter box, a food and water dish, and a scratching pad or post. In addition, they will need a few cat toys to help them work off their extra energy and stay a healthy weight. Maine Coons are as active as common cats, therefore not needing a lot of exercise. However, Maine Coons can get separation anxiety if left alone for too long, so make sure to give yours plenty of attention.

Maine Coons have very long, dense fur, so they need to be brushed at least 2-3 times a week. This will help to prevent matting and knots. In addition, a Maine Coon’s claws should be trimmed regularly. Their teeth should also be brushed often to prevent them from getting cavities. When brushing a cat’s teeth, make sure to brush as gently as you can to prevent damaging the cat’s gums.

Good training is very important for cats, so they do not show any unwanted behaviors. It’s ideal to start training a cat when they’re still a kitten, as they’re the most impressionable at this age. However, you can still train a full-grown cat. It’ll just take a lot of patience. Some common training for cats and kittens is:

When training a cat, it’s always important to use positive reinforcement. That way, the cat associates doing the right thing with getting a treat or attention.

Maine Coons have grown very popular over the years, so prices have risen considerably. Buying a Maine Coon has become a serious investment, with kittens costing anywhere from $400-$2000 in US dollars. It’s very important to make sure you’re purchasing your kitten from a quality breeder instead of a kitten mill.

Maine Coons have a loving demeanor and are very patient around young children, making them ideal as family pets. They also tend to get along well with dogs. However, all cats have different personalities. Some may be more friendly and loving, while others may dislike being touched. Generally speaking, though, Maine Coons make fantastic family pets.

Blue Maine Coons are a beautiful color and make great pets despite their size. Their temperament is gentle and agreeable, which makes these felines great family pets, and they love attention and being petted! In conclusion, a fluffy Maine Coon could be a perfect addition to your family.

Warning Signs When Introducing Cats & Guide To Do Successfully