Halloween is a spooky and fun time of year. Naming a new cat a Halloween inspired name is a fun idea. If you are bringing home a new fur baby and want a Halloween name, you are in the right place. Check out our list of 300+ Halloween cat names. 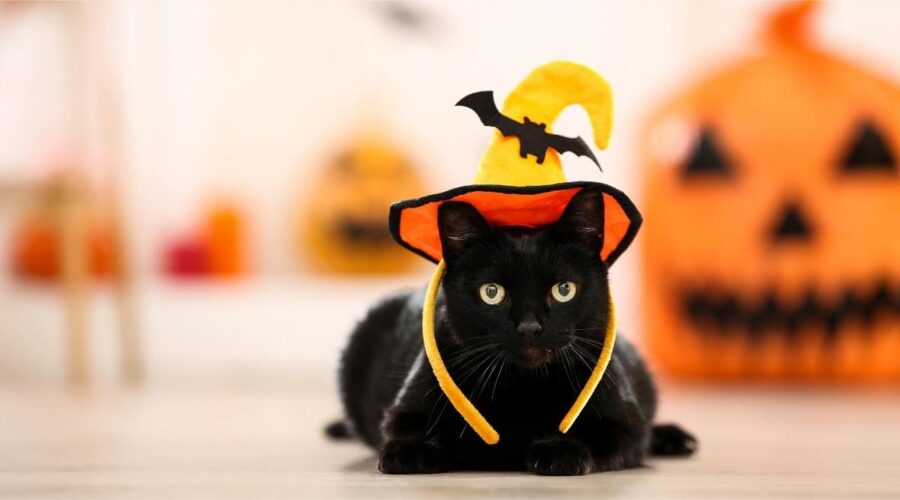 Halloween is in the air, and feline owners are busy preparing for the spooky night. For some owners, Halloween is more than a one-night event. It is a lifestyle. Bringing home a new kitten around October can inspire owners to pick a Halloween-inspired name for their new cuddle buddy.

Cats are a huge part of Halloween. After all, where would a witch be without a spooky fur baby to accompany her on her magical quests? Black cats are often depicted in decorations, jack-o-lanterns, stories, and costumes. Cats and Halloween go together like paper and glue.

Feline owners love to let their purr babies get in on the fun of Halloween, and we are all for it. Name inspiration can come from many places, entertainment, folklore, music, nature, or holidays like Halloween. We love the idea of giving kitties a Halloween-inspired name. Check out our list of 300+ spooky, scary, and fun Halloween cat names.

We have plenty of name ideas to share, but first, explore some of the scariest names we could find. Some may be familiar, others may be somewhat unique, but all scare the meows right out of us.

The Babadook is one of the scariest characters ever. A storybook monster comes to life that takes over the lives of a single widowed mother and her young son. The story is told in an Australian horror movie that, by all accounts, is terrifying.

The Chupacabra is a creature born of Latin American folklore. It is said the creature attacks livestock and drains their blood at night. The Chupacabra is said to be 4 to 5.5 feet tall, with an alien-looking oval-shaped head, large sharp teeth, and red glowing eyes. The creature often has long, thin spines all along the spine from the head to the derriere. The skin is green, furry, and in some reports, scaly. It is also a bi-pedal and walks upright on solid hind legs. If this creature does exist, you will find us as far away as possible.

Elizabeth Bathory was such an evil and deranged individual that she was given the nickname of the “Blood Countess.” A Hungarian noblewoman who lived during the late 16th and early 17th centuries, the legend says she brought young victims to her castle under the guise of high-paying jobs. Once under her wing, her unknowing victims were tortured in an unknown number of terrible ways. According to the scary tale, to preserve her youth, Bathory would drain her victims of blood and then bathe in it. It is said she massacred anywhere between 80 and 600 young women. She was only stopped when her thirst grew, and the countess started to go after young noblewomen.

La Llorona, also called the Weeping Woman, is a Hispanic American character from a terrible folk tale. The story dates back to 1550. La Llorona is the troubled ghost of a mother who, when discarded by her wealthy husband, drowned her children. Devastated at her actions, she then takes her own life, only to be stuck in purgatory. She walks the bank of the river, dressed in white, weeping for her children, as she reaches out with bloody, skeleton hands. To add to the fear, it is sad that if her wails seem near, she is far away, but if her cries seem far away, she is very close. Scary enough yet?

H.H. Holmes was a bona fide serial killer. The deranged man built a literal house of horrors at the 1893 Chicago World’s Fair. A three-story building complete with a hidden basement where he conducted hideous experiments on very unwilling victims. Eventually, he was convicted of four murders, although he took credit for at least 27 others and hung in 1896.

Jack the Ripper is a famed yet still unidentified serial killer who hit the streets of London in the year 1888. Many of his victims were streetwalkers he lured into darkened alleys, then took their lives. His weapon of choice was a carving knife, leaving his unique mark on every victim. He is credited for at least five murders, though many more were either copycats or his original work. The last crime was in 1892, and despite years of investigation, several suspects, and numerous theories, the case has never been solved.

Vlad The Impaler was no made-up character. He was a real man, whose proper name was Vlad III Dracula. He was born in Transylvania and ruled in the 15th Century. Vlad ruled the area once called Walachia, part of modern-day Romania. He was neither kind nor just. Instead, he was a ruthless torturer and mass murderer. His cruelty was the stuff of nightmares, and he was known for barbarous, brutal executions. Vlad preferred impalement, which inspired his nickname. It is said Vlad dipped his dinner bread into the blood of his victims. This strange habit, coupled with his cruelty and birthplace, inspired the character of the bloodsucking and dapper vampire Dracula.

Now that we have scared the meow of you, let us get down to the feline name business. Along with the terrifying tales we have already told, here are some ideas for Halloween cat names. Some are spooky, some are cute, and some are the stuff of nightmares.

These cute names can work for male or female cats. They are cute and fun yet pay tribute to that October holiday that Is both a little fun and a little scary. If you are welcoming home a sweet new kitten this fall, try out one of these cute Halloween-inspired ideas.

From the glow-in-the-dark cobwebs to haunted houses, Halloween and spooky go hand in hand. Halloween is all about getting spooky and having a fun, good-natured fright. While some parts of the holiday are super scary, these spooky cat names are all in good fun.

There are some names out there that simply ooze scary. We are in that time of year when everyone embraces the scary, which can be a fantastic way to find a fun moniker for your kitty. Embracing that scary feeling can be a lot of fun and spark a unique idea. We hope our ideas for scary titles inspire you.

Halloween would not be as fun without a bit of magic. So many stories about this holiday mesh with magic, and we love it. Magic and the magical realm are always wonderful places to find inspiration. We hope some of these magical monikers will cast a spell on your new purr baby.

Of course, we associate the vibrant color orange with Halloween. After all, many of our favorite holiday things are this color, including pumpkins and that delicious treat of candy corn. The color orange is bright, beautiful, and boisterous, just like your new feline friend. The color orange inspires these name ideas.

Black cats, witches, vampires, cauldrons, spells, nighttime, and spookiness are all associated with the color black, just like Halloween. There are many different ways the color black can inspire us, and when it comes to cat names, there are plenty of ideas. Check out these ideas inspired by the color black.

Horror is a massive genre, whether it be books, television, movies, or urban legends. While these stories scare the pants off some people, for others, they are a source of good fun. Around this time of year, it is a very popular activity to scare oneself or others. Haunted houses abound, and people cuddle up on the couch for horror movie marathons. If you love horror movies, then some of these classic horror characters might make the perfect inspiration for your new pet’s name.

Last but not least, we have to talk about candy. Halloween would not be as fun if we did not break out those tasty, sugary treats. Chocolate, fruit candy, spiced candy, chili candy, hard candy, candy bars, jawbreakers, chewing gum, taffy, whatever it is you like, Halloween has it. Check out this list of sweet candy-inspired ideas. A quick side note, never feed your cat candy or sweets. Even if they are named Almond Joy, or Peanut Brittle, they should never eat one. Like many other human foods, candy is unsafe for cats because it contains different ingredients that can harm them, including sugar and artificial sweeteners.

Picking a name for a new kitten is a big deal. After all, your cat will respond to this name, and you will call it out for the next several years. Owners want to pick a name that fits their cat’s personality but reflects some of their own. Anyone choosing a Halloween-inspired name is all about fun, but there are a few things owners should keep in mind when trying to find that perfect fit. We have a few tips to make the naming process smoother.

Halloween is all about fun, and owning a cat is one of the most enjoyable, rewarding, and fun experiences a human will ever have. Naming a new kitten something spooky or scary is a fun and lighthearted way to pick a unique name. We hope our list of names has given you some food for thought, as well as helped you on your path to finding that perfect Halloween cat name.