The Bengal kitty is a magnificent, beautiful breed that looks like a miniature leopard. These kitties can come in a range of colors. We learn more about the colors and patterns of these exceptional felines. 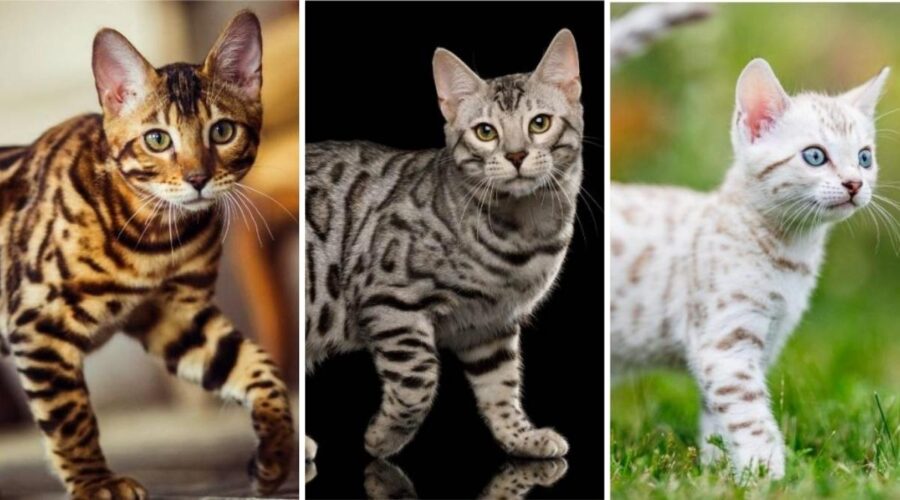 Bengals are a popular, newer breed of cat. They are quite popular due to their unique look. These kitties appear to be tiny leopards, making them one breed many people are curious about. There is a range of Bengal cat colors, and not all colors are recognized by breed standards.

When looking for a new kitten, especially for a breed like the Bengal, owners will want to learn as much as possible. For purebred cats with a high price tag, coat color can sometimes impact the price, so it is essential to be informed.

There are a variety of patterns these kitties can have. They can also be mixed with other breeds, which can cause more variations. We look at the different coat colors of the beautiful and magnificent Bengal.

The mighty Bengal is an intriguing breed. Their regal appearance and incredible physical prowess make them stand out in a crowd of kitties. These big tykes are known for their signature, leopard-like appearance, but there is much more to these regal felines than meets the eye.

Bengals are genuine hybrid animals. They are a cross between the wild Asian leopard cat and domestic kitties. There were many attempts in history to breed hybrids, but the most successful effort and the person credited with creating the crossbreed was a doctor doing leukemia research in the 1970s. Doctor Willard Centerwall was a pediatrician and leukemia researcher who bred these hybrid kitties to study the wild Asian leopard cat’s partial immunity to feline leukemia. When he was done with his studies, the doctor gave the remaining kittens to a well-known breeder in California.

The breeder then worked to develop these kitties into domesticated kitties kept as pets today. These spotted kitties are not a super common breed to find, though they are extremely popular. People are drawn in immediately because of this cat’s exquisite looks. They appear like miniature leopards and are sometimes called toy or pet leopards.

Pet leopards are a highly intelligent, very physical breed. They have a sweet temperament with trusted humans but may need close supervision around smaller pets like birds and rodents. These are incredibly physical, high-energy animals, but that does not mean they are not personable. They are quite friendly, curious, and outgoing. Although they may look somewhat wild, these kitties make wonderful pets who love to play.

These purr babies are medium to large felines and can weigh between 8 and 20 pounds when fully grown. They reach a height of 13 to 16 inches tall from paw to shoulder. These big sweethearts live for a long time, between 9 and 16 years on average. They need a lot of attention and are on the higher end regarding costs, but these beautiful little leopards are worth the extra effort.

An extensive range of coat shades and colors can be present across the breed. Three primary color categories are officially recognized. These are Brown, Silver, and Snow (which included Seal Lynx, Seal Sepia, and Seal Mink Point). Though several patterns can appear, only the spotted and marbled patterns are recognized for competition.

The International Cat Association (TICA) only recognizes brown, silver, and snow. We will get into a little more about each color variation below.

The brown color range is extensive and can include softer shades like golden brown, toffee, caramel, or honey, and even range to a reddish color. Browns have lighter base coats and darker markings. They have long, black-tipped tails and green to golden-colored eyes. They are often called leopard Bengals because they look remarkably like the larger, spotted wild cats after which they are named.

Silver Bengals stand out in the crowd due to their stunning looks. These cats look extremely sparkly in the sunlight due to the glimmer effect their hair has. Silvers do not have any gold, brown, or orange shades in their coats. They may have some blue or gray, even charcoal-like shading. Their eyes are often green or gold. Silvers are often described as exquisite. These tiny, snowy leopard-like cats are truly a remarkable sight.

Though not recognized by TICA, there are three more color variations that are often seen in the breed. These are charcoal, blue, and then melanistic or black.

Charcoal-colored pet leopards do not have a gray base coat. Instead, this coloration appears as a layer that covers the top of their coats. Charcoal can occur in any color variation, including the three recognized colors. This is sometimes also called a “ghost layer.” These felines usually have very dark faces and a darker stripe that descends along their backs.

The Blue Bengal is an incredibly rare kitty. Blues are said to be the rarest and most hard-to-find coloration in the breed. These rare purr babies have a powdery to steel blue base coat with cream tones worked in. They will have darker markings in variations of gray with green or hazel-colored eyes.

Melanistic kitties look like miniature black jaguars. They are exquisite and unique looking. These kitties have darker base coats adorned with marbled and spotted patterns. They can have blue, green, aqua, or golden-brown-hued eyes.

Pet leopards have a sheen to their coats that is not like most other felines. This sheen is called “glitter.” It results from translucent, hollow hairs that appear to shimmer when in the right beam of sunlight. Not all kitties will have this look, but those that do are nothing short of magnificent. Silver and Snows also glitter, with a shimmery white effect on their glossy coats.

Kitties in this breed come in a few different patterns. For starters, all Bengals are Tabby cats. Tabby is not a breed. It is a color and coat pattern. While Bengals are all Tabbies, not all Tabbies are Bengals. Bengals have the M-shaped forehead marking common to Tabbies, as well as spots, stripes, and whorls on their bodies. These kitties come in three patterns, spotted, marbled, and a combination called sparbled.

Spotted Bengals are the most commonly seen. They look very similar to tiny leopards. Their spots are small to medium and present all over their bodies. Lighter base coats with darker spots are the most sought-after kind. Spots can come in a variety of shapes and colors.

A marbled Bengal is a kitty with a classic tabby M-shape on its forehead and a coat patterned with stripes and swirls. These fine feline coats look like fine smooth marble. They can have a broad range of shapes, colors, and patterns that appear. Some look like stripes, whorls, and even bullseyes.

A sparbled one has a mixed coat of both spotted and marbling patterns. This coat patterning is not recognized by breed standards but is glorious to look at. They come in various colors and can appear quite dramatic when there is a significant color contrast between the base coat and markings.

They will need plenty of exercise, room to explore, and places to climb. Part of caring for one will be to groom their magnificent coats. Coat health depends on many other factors, one of the most important being nutrition. Felines should always be fed a diet full of high-quality animal proteins. Felines are obligate carnivores and need to eat meat to survive. A rich, healthy diet will help keep their coats looking as shimmery and healthful as possible. Besides nutrition, grooming is a big part of maintaining a pet leopard’s coat to keep it in top shape.

These big purr babies will need regular brushing and grooming upkeep. Pet leopards are skilled self-groomers, but owners can do a lot to help them out. These purr babies have short hair, so they do not need daily brushing. Once or twice a week, using a soft brush will keep them free of excess hair, dead skin, and dander. This is a wonderful time to bond with your pet and inspect them for skin irritations, injury, or debris. Include inspection of nails and regular clipping at this time. Felines will need their teeth cleaned regularly as part of grooming.

Bengals love the water and will enjoy splashing about. They can be bathed occasionally, every six weeks or so if needed. Always brush before bathing to work out any tangles or mats. Bathing is done on a cat-by-cat basis. Some will like it more than others. Felines who spend time outside may need more frequent bathing and brushing than those that stay primarily inside.

Yes, Bengals are referred to as hypoallergenic. This is a popular breed among cat owners that have feline allergies. The sensitivity people have will vary depending on them and the specific cat. They produce less dander than other breeds and lower levels of the allergy-inducing protein Fel d 1. These felines are single-coated and shed much less than most feline breeds with double coats. This breed is less likely to cause an allergic reaction but is not entirely allergen-free. There is no such thing as a totally hypoallergenic cat.

Is it true that Bengals are native to the United States?

Yes, this is true. This breed is a true American-bred kitty. The first Bengals were created in the United States. These cats are native to the U.S., just like another prevalent breed, the Maine Coon.

What is the rarest Bengal color?

Blue is the rarest color. These kitties are very unusual looking and super hard to find. Black pet leopards are also relatively rare and not often bred. However, some breeders are hoping to increase the population of these rare colors.

No. Bengals, especially those kept as pets, are not half-wild. The only cats that are true hybrids are the F1 through F3 generations. These are sometimes called the foundation generations. Domestic Bengals are not wild cats, nor even considered truly hybrids. Most of the kitties in this breed kept as pets are F6 or beyond.

Are Bengal cats legal to own?

Bengals are legal to own. However, this varies by state and municipality. It also depends on the generation. F1 through F4 are unsuitable for pets because they can be more like their wild counterparts and have unpredictable behavior. In the U.S., Hawaii has outlawed the ownership of all generations. F1 through F4 are banned in Alaska, Connecticut, Delaware, Georgia, Hawaii, Indiana, Iowa, Massachusetts, and New York State. Some cities, like New York City, New York, Denver, Colorado, and Seattle, Washington, also ban ownership of all generations. It is essential for anyone wanting to adopt a Bengal to check the local and state regulations of where they live before bringing one home.

Bengal cats are gorgeous felines and are known for their unique, leopard-like coats. These magnificent kitties can come in various colors and patterns, though not all are accepted for competition. Many of this breed’s coats will have a shimmer, making them seem like they glow and sparkle in the sunlight. Some colors, like blue and black, are exceedingly rare. Regardless of their coat color, these tiny leopards are a true sight to see and not a kitty anyone will soon forget. The Bengal is an incredibly unique cat, and it shows in their magnificent coats.